Section One - What is technology?

A story about a pyramid and some chickens (5 minutes)

Have you ever tried to answer the question: what is technology? Give it a try! Pretty difficult, isn't it?

There are a lot of different answers to the question. You could, for example, read all the theory on Wikipedia or read the definition in the Cambridge Dictionary, and then you might know a little more, but you won’t feel it yet. You could also look for a quote to make you feel what technology is, a simple Google search would offer you something like this:

Technology is everything that does not work yet - Danny Hills

Nice! Great for a PowerPoint presentation, but still a bit nondescriptive and like most quotes a bit of a cliche but if you are the kind of person that likes technology quotes there are websites with thousands of them.

A pyramid of technology

For this crash course, we think the best way to make you feel what technology is, is by introducing the Pyramid of Technology. Smart, people like pyramids! The pyramid of technology is a concept that was introduced by Koert van Mensvoort. These are the words with which he introduces his concept:

“With the Pyramid of Technology I propose a model to describe the various levels at which technology may function in our lives. The pyramid is inspired by Maslow’s Hierarchy of Needs (Maslow, 1943), which describes human requirements like nutrition, shelter, security and love in subsequent stages. Similar to Maslow’s model, technologies can move up and down through various levels of the pyramid, while lower stages need to be fulfilled before the next stage can be attained. Although the Pyramid of Technology will certainly not answer all our technology related questions, it can serve as a tool for scientists, inventors, engineers, designers and entrepreneurs to position themselves in the playing field of technological development and eventually create better technology.

Moving through the seven stages we will learn that new technology may seem artificial at first, but as it rises from the base of the pyramid towards the top, it can become so accepted that we experience it as a vital or even a natural part of our lives. Further on I will discuss how this naturalization of technology provides an important new perspective on the relationship between people, nature and technology. But let us begin by discussing the various stages of the pyramid.” 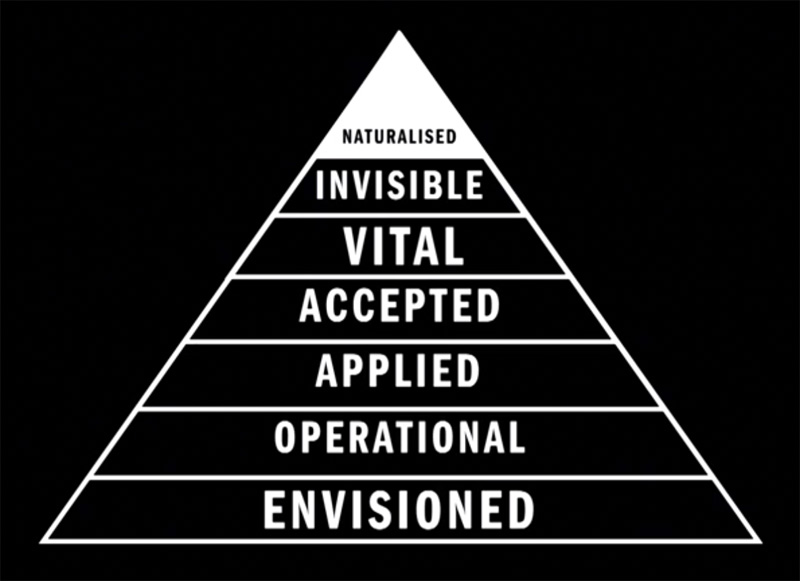 Below, we describe the seven different stages of technology.

All technology is born in the fantasy of man. New technology is therefore often invented by science fiction writers, such as Arthur C. Clarke who invented the satellite as early as 1945 (20 years before the actual introduction). Some technologies go from invented to actually available very quickly, others remain invented indefinitely.

In this stage there is a proof of concept of the technology. It works, but often only in a controlled environment. Or there are counter forces, because the new technology undermines an old revenue model. Or it is still too expensive or unstable. Examples are quantum computing, cultured meat and wireless electricity.

Quick Question: Can you think of another technology that is still in the operational stage?

In this stage, the technology from the lab is not yet widely accepted. This is a complicated phase. Some technologies are rapidly accepted, others linger in this stage (such as nuclear energy, which has never really been accepted). You also have competition at this stage. Electric cars, for example, were there earlier than petrol cars (yeah really!!), but lost to the competition and remained in this stage for a long time. In the applied phase you also have technologies that are nostalgic. These ‘slide down’. Examples are vinyl, steam trains and hot air balloons. They were once ‘stage - four - accepted’, but now they are ‘applied’ again.

These are technologies that become part of our daily life. ATMs, GPS, television, microwaves, etc … Controversial technologies, such as nuclear energy, are struggling to make the switch to accepted. This does not apply to technologies that are closer to our customs, traditions and intuitions. That is why some technologies also copy these habits, such as ‘reading’ on the iPad or the digital bookshelf on the iPad. At the same time developments such as the iPad will push the bookshelf itself down into the pyramid (oh, irony!). Technologies are also very much tied to culture at this stage. Some people cannot imagine a life without a dishwasher in other parts of the world it is an extravagant appliance.

Here technology becomes our second nature. Think of your smartphone. For many, it feels like you’re missing an arm or a leg if you’re not carrying your phone. Other examples are sewers, water systems, electricity, antibiotics, internet. Vital technologies often provide the infrastructure on which ‘lower’ technologies run. Technologies don’t become vital that often, but if they do, they won’t go away anytime soon either. So you have to look carefully at the pros and cons.

No, we do not mean WIFI.

Some technologies are so successful that they are no longer seen as a technology. For example, writing. Or money. And, if you are really doing showing off: writing a check. Other examples are time and agriculture.

As with the Maslow Pyramid, technologies rarely reach the top. Most technologies reach level 4 and then drop back. Sometimes there is a technology that becomes vital and rarely they become invisible. In this stage we see naturalized technologies as part of human nature. The best example is cooking. Cooking is an external stomach. We pre-digest our food, allowing us to consume many more calories with much less energy. And with that extra energy we have been able to develop further.

There is a lot more to be said about the Pyramid of Technology, there are exercises to be done but for that we refer to section seven (additional materials).

The Pyramid of Technology describes how technology starts as an idea and sometimes becomes nature. A variation on that theme is a new look at the relationship between technology and nature. This is best explained by the following quick questions. Think about them:

That is the topic of section two!

Take aways from section one:

If you want to mark this section as completed you need to login or create a free account so we can save your progress.
Back to course Next section