A story about some giant turkeys (10 minutes)

Talking about a better place

Does technology make the world better? Well, first, define better! That is a hard question. We will talk about that that in section five.

For now we see defining better as a luxury. If people do not have anything to eat, are unsafe or sick, then better means less hungry, safer, healthier. Only if you have all these things, can you worry if, for example, a certain technology has a negative impact on your autonomy. So, in this section we ask the question: does technology make the world better if we look at some basic indicators?

Dutch writer Rutger Bregman starts his book about progress with the most important lesson in history: everything used to be worse! We have made tremendous progress, not because of politics or religion, but thanks to science. Thanks to technology. The figure below shows how we have made spectacular progress together in many areas over the last two centuries. 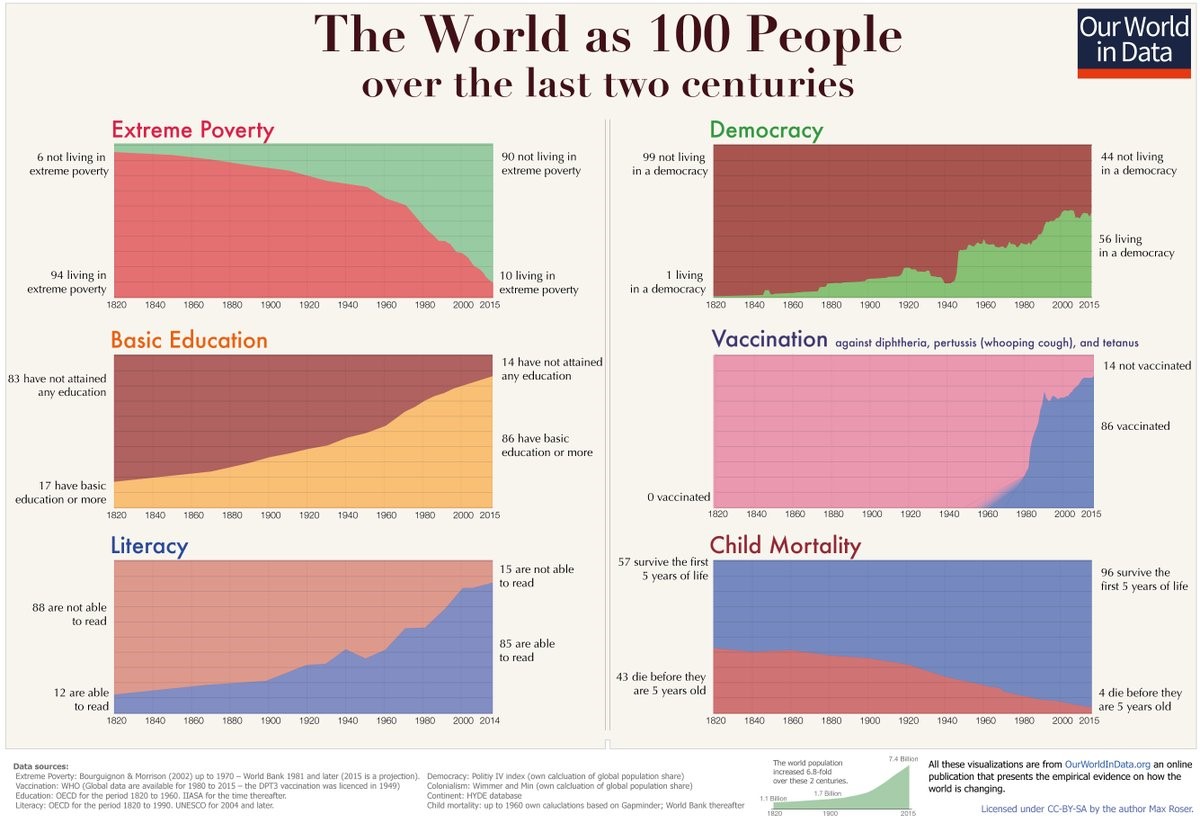 (image from our world in data, more information: click here)

So, technology makes the world better? There is less extreme poverty. Less child mortality. More education. More literacy. People live longer. There are less conflicts. And so on.

Well, yes, or maybe there are also some arguments against it.

First, technology has been devastating for the environment. There is a warming climate, there is the destruction of forest, the depletion of natural resources, the pollution of air, water and soil and the extinction of animals. A lot of indicators are looking very bad thanks to technology. Maybe technology is also the solution for our environmental problems but that remains to be seen.

Second, past performance is no guarantee for the future. Maybe technology has made our life better for now but it also created the possibility of nuclear war, of biotechnological warfare, artificial intelligence that dominates human beings, a surveillance society, and the creation of a transhuman super race that makes most of us superfluous.

And, third to make things more complex, there always will be so called black swan events. These are events that come as a total surprise and have major effects. Things like the rise of the Internet, World War I, the dissolution of the Soviet Union, 9/11 and maybe corona (though some people think corona is more of a grey rhino – you could have seen it coming a mile away).

Thinking about our future

So in certain aspects the world has become better and in others it has not. Technology can be a recipe for disaster or way to an even better world. Thinking about technology and how it can make the world better is becoming more and more important because technology is evolving really fast and changing the world at a tremendous pace.

In the next video we have Peter Diamandis, an incredible techno-optimist, talking about this (5 minutes):

According to Diamandis, everything is going to change really fast and the next 25 years are going to be an extraordinary ride. The base of the predictions made by Peter and many like him is the convergence of different technologies that evolve exponentially. This idea is often called Moore’s Law which is explained in 2 minutes below:

And then, you have some people that like to say that exponential growth in the past is no guarantee for the future. To emphasize their argument, they talk about turkeys. You see, turkeys have doubled in size since 1929. If this continues soon they will be bigger than humans, and not much later they will dwarf the earth.

So if all this talk about exponential change makes you feel anxious, just think about turkeys and relax.
Or don't. 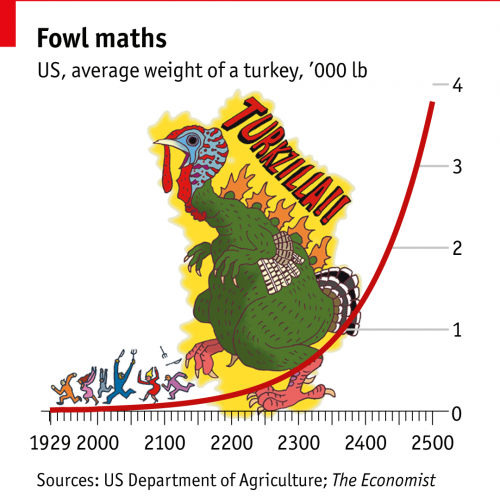 (Picture from the Economist - Turkzilla)

A very short wrap-up of section 1-4

This all makes the question of what we expect from technology even more important. That is the topic of section five.