In section one we learned about identifying and assessing stakeholders. This was very basic and a lot of common sense. To become good at it, you need to practice. We will do this in section five. The context of section five are platforms. In our modern, digital world, we think it is good to understand a bit more about platforms. That is why we try to combine these things. In section two, three and four we will look at platforms. In section five we will try and do a stakeholder analysis of an imaginary platform.

But first, what are platfoms exactly? And why do they matter?

There are a lot of people talking about the platform economy. They talk about Booking.com, Facebook, Uber, Airbnb, IaaS, PaaS, Amazon, sharing economy, gig economy and so on. Most of the time it is pretty vague.

Just watch this one minute video on the platform economy that will tell you exactly nothing.

So, before we start talking about platforms and 'the platform economy' let's try to be more precise.

Let's start with the boring but crucial part: a definition. We must first know what we are talking about before we can form an opinion about it and look to the future. When you read books about platforms or the platform economy, the first thing you notice is that there are quite a few attempts at definitions. The second thing to note is that these definitions are often opaque or confusing. For example, the platform economy is often used in the same breath, or as a synonym for the sharing economy. Later in this crash course we will see that these are really completely different things.

A definition of the platform society that is common is the following:

"A technological, economic and sociocultural infrastructure for facilitating and organising online social and economic traffic between users and providers, with (user) data as fuel."

So, let's start with this definition and try to breathe some life into it.

We read a lot of books on platforms. We read a lot of definitions and we made a picture of it. Based on this picture, we will explain what platforms are exactly. The picture looks like this. To explain this picture we will cover the following topics:

The infrastructure (or architecture) of platforms is shown in the bottom centre of the picture above (or the one you printed). This part is divided into several blocks. At the very bottom you have the basic infrastructure platforms. You can consider these the same way you consider an electricity network or a road network. They are preconditions for so-called 'higher platforms.'

New platforms have been built on top of the basic (or bottom) infrastructure platforms, which are also (kind of) infrastructure platforms. This concerns operating systems, such as iOS (iPhone/iPad) or Android and so-called cloud services, such as IaaS-PaaS-AI. Companies like Amazon, Microsoft, Oracle and Google offer users services such as server capacity (IaaS), database capacity (PaaS) and nowadays, also all kinds of artificial intelligence applications (for example, text or image recognition). In this way, higher platforms can build new services very quickly.

For example, if you have a great idea for a new app, you can program it on iOS, make it available in the App Store, distribute it through the internet and get scalable computer capacity (and some AI) from Amazon.

This also means that there are certain players who are much more powerful than others! These are dominant platforms that people use. For example, Facebook, Google, Amazon, Uber, Taskrabbit, Airbnb and Dutch weather-app: 'buienradar.' Some platforms are an 'end point.' Other platforms actually form a platform themselves.

For example, Facebook offers the possibility to build other platforms on Facebook. Uber, on the other hand, does not offer that option. You can't build a pizza delivery service on Uber yourself. Uber does that themselves (Uber Eats).

It is also important to know that the platforms together form an ecosystem with large and small players. For example, you can log into Zoom (a video conferencing platform) with your Facebook account. Also, mostly, a lot of data is exchanged between platforms. And there is a lot of sharing. For example, you can share your Spotify activity on Facebook.

Below, you can see an overview of the platforms of Fernando van der Vlist (from 2016, so already a bit dated) that makes it clear that there are large and small players and that there really is a large ecosystem.

So, in short, the architecture of platforms consists of basic platforms (like the internet) with, on top of that, other pre-conditional platforms such as operating systems and server capacity and databases on which other platforms are built (such as Facebook). Other platforms can be built on those platforms. Together they form an ecosystem in which some players are a lot bigger then others.

A few researchers in the Netherlands tried to find out what would happen if you block all connections to Amazon, Apple, Facebook, Google and Microsoft. The result was that almost no web services could be used anymore. Even local web services (shops, cities, theatres and so on) run on these platforms. 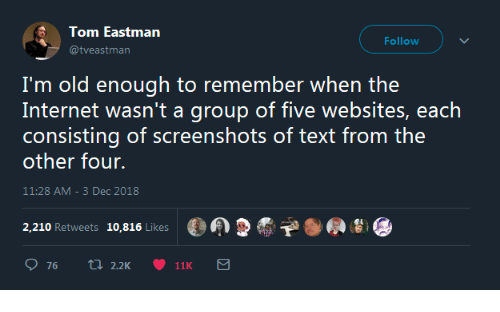 A simple example: if you order an Uber, does the driver see your ethnicity? Does the driver know your planned route? These simple decisions are very important in terms of fairness and discrimination and far from neutral.

Another example, insulting someone used to be difficult. First you had to write a letter and send it to the newspaper or physically go somewhere with your message. Now it's click, tweet, swipe. Another person offended! To understand platforms you have to look at the reduced transaction costs;

The product-service economy is closely related to another term you hear a lot in the context of platforms: the gig economy. Here is a video with an explanation (one minute):

You can immediately see from the different examples that it is not easy to divide the platforms into categories. Some are active in several categories. In addition, it is not always easy to distinguish the public relations of the platform from the actual activities. Airbnb, for example, likes to pose as a representative of the sharing economy, but is designed in such a way that it is also very useful (and especially acts) in a product-service economy.

Finally, let's look at the three mechanisms that all platforms use:

A great example of commodification is linguistic capitalism. The way that words through Google AdWords have becoming products with a price. First it were only written words (in the Google Search Bar) but with the rise of the smart speakers even our spoken words are commodified (more in the additional materials).

These three mechanisms are very important to understand. It also means that non-profit platforms can still generate very commercial behaviour among users or fierce competition in society. So, if the government created a loal version of a platform that works like Airbnb, (one that pays taxes and is non-profit), then still there is competition between house owners.